Today’s Glimpse into the Virtual Home

Earlier, I wrote about the concept of the Virtual Home as the center of your activities in virtual reality. It is personal space, lounge, hangout, and launching pad. There are a number of ways to handle the user interface for the Virtual Home.

We’re going to quickly look at VirtualReality.io, cover the concept for the Rift Navigator, and go back and pick up a great Virtual Home that I missed called Anarchy Arcade. After that, the conversation will switch gears to highlight a fundamental problem inside the Virtual Home (and virtual reality as a whole).

VirtualReality.io is a no-nonsense launching pad for VR software. It doesn’t do a lot. It doesn’t have the personal space, lounge, or hangout. What it does do, though, it does correctly. They’ve got the launching pad covered for the novice user.

The user selects an application from a catalog of third party software and it installs it onto their system. When the user selects the installed program, the interface quickly moves out of the way, but returns when the application terminates. There is no need to remove a head-mounted display. At a basic level, a Virtual Home needs to behave similarly.

Currently, the major downside to VirtualReality.io is content. Content is centrally managed. In order for an application to be listed, a request has to be submitted, and the application has to meet certain requirements. My hope is that as VR software matures, these simple technical requirements will be a non-issue for most applications. Perhaps a set of command-line parameters can be standardized to make the adaptation easier.

Some concept images for Rift Navigator were released yesterday. It has good art direction. From the images, it appears to have everything we’re looking for: a private space with some customization, a place to hang out and invite others, a place to launch VR software or Metaverse destinations from, and also a place to consume media from.

As a design choice, they aren’t currently looking at creating an environment which can be fully explored. Transportation from room-to-room or within a room would be via teleportation. Why? They state that they wish to avoid the inconsistency between our real bodies and our virtual bodies, which may break immersion. The unique touch in Rift Navigator is the user interface: a virtual tablet which can be invoked and dismissed at will. 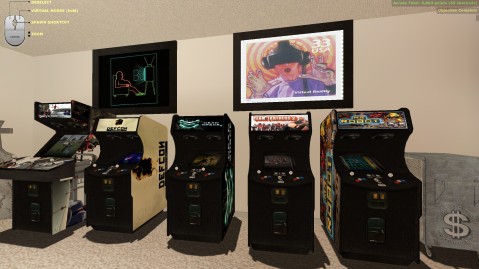 It is easy to be too complimentary of a concept image because it may have yet to be compromised by real-world design choices. These choices can force us to accept something that is less than our own vision.

I’m a little late to discover Anarchy Arcade, a virtual world that seems to have just about everything we’re looking for in a Virtual Home. If this is the kind of thing that you might be interested in, I’d encourage you to go and download the free prototype. A Steam client is required to run the demo (because the code is based off of Source SDK Base 2013 Multiplayer). 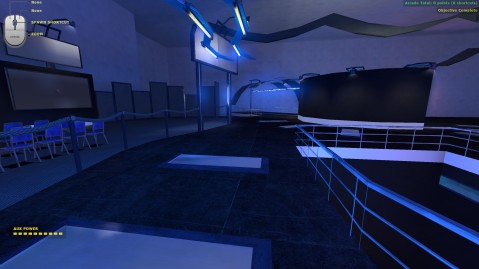 Starting from a base room, you fill it with props (objects such as chairs, tables) and media (YouTube pages, images, movies, Steam software, PC applications). In this particular implementation, you don’t start out with the full library of props, but you continue to unlock more objects as you add additional content.

This unlock system is mildly motivating, but it is annoying to be denied the big-screen TV and other must-haves until you’ve accomplished specific goals. I manipulated my own score to quickly gain several unlocks by moving high-valued objects and redeploying them. 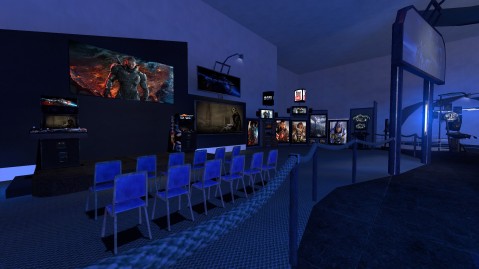 The art style could use a bit of work, but to be fair, I wasn’t using one of the standard demonstration maps. Once populated (and populating the map was not an experience for a novice user), I was ready to go into multiuser mode.

The fact that this programmer is out there and ahead of everyone else also means that his is the first real demonstration of where the Virtual Home concept starts to run into problems.

There is a lot of metadata that needs to be managed in order to put a clickable movie on the wall. We’ve got the title, description, media type, the actual media, optional trailer media, a static logo, a marquee, and a URL to send someone to in order to purchase the media. A lot of that is pulled together automatically using scrapers.

Scrapers are an unfortunate problem. A fully automatic scraper probably isn’t going to do a great job. A targeted scraper may not be difficult to code, but when you have to maintain a number of different scrapers, you’ll be working with third parties who don’t make collecting metadata so easy and won’t notify you before things break.

While you may share the filename of the movie, the actual content of the movie is not shared. It assumes that the file distribution for images, movies, and software all happens outside of Anarchy Arcade (or not at all). “Anarchy Arcade is not screen-sharing or peer-to-peer file sharing software,” says software designer Elijah Newman-Gomez.

In Multiuser mode, if a piece of media (images, movies, and more) is missing on the other end, it doesn’t play. The other users must literally have “C:/Movies/Guardians of the Galaxy/Guardians of the Galaxy.mp4”. The final version of the software will try to bridge the gap by offering the user choices of where the media may be obtained. There is no way to guarantee that the two versions will be synchronized.

As a launching pad for software (Steam or otherwise), Anarchy Arcade does a fair job. As a virtual reality launcher, it has some of the same immersion-preserving requirements as VirtualReality.io, but it doesn’t actively enforce them. It is up to the user to configure the connected software to behave appropriately, or to deal with the consequences.

Additionally, the Source Engine doesn’t lend itself to being a lightweight app launcher. When launching outside applications, the program suspends itself to conserve system resources. Once control is given back to Anarchy Arcade, the current version requires a click from the user and a fair amount of time to establish control again.

Anarchy Arcade is still in development and has a few more twists waiting for you. If you’d like to read more about where the developer is heading, then visit his Oculus Developer Forum post from January 29th, 2014. 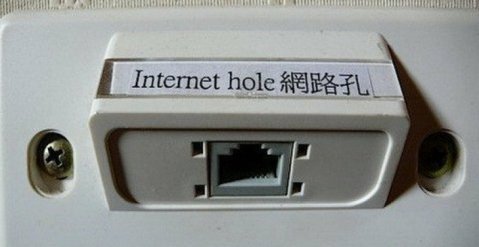 The timing of these media management examples couldn’t be better, considering that they will be the topic of an upcoming post. Media management is even more necessary for Virtual Worlds than for the Internet. A piece of the Internet is missing. When and if someone is able to solve it, they’re going to be the king of the Metaverse.

How do we handle content? VirtualReality.io goes for a centrally managed approach. They themselves define what media is available, where it can be downloaded, and provide the necessary screenshots and decisions for you to choose.

Anarchy Arcade attempts to lean on Steam as a content provider (today for games, tomorrow perhaps for media as well). Where that doesn’t work, Anarchy Arcade hacks around it with scrapers. Considering that they’re up against a problem as fundamental as media management, they do as good of a job as you can expect.

Alternatively, if I have the Guardians of the Galaxy movie and you don’t, there is no direct way to codify what exactly I have so that the system can automatically determine how you need to go through your preferred media provider to receive a copy. There is no authority that I can go to in order to get permission… even voluntarily pay for permission… to share my media with you. That’s big.

ASIDE: Good for Marvel. As recently recently popularized by John Carmack, they’ve provided an API which describes their comic book media. Having a common dictionary to map media to is at least part of the problem that needs to be solved… for all media.

There is no method of matching movie capabilities (Full HD, SD), variants (European version, Director’s Cut), or media (Blu-Ray, streaming rental). If I want a marginal upgrade, there is no recognition for what I currently own. My resource is stranded, and no amount of money will convert my participation into something else. I either have to live with what I have, or I have to pay full price for only a marginal difference.

Fess up. Is the business model to screw me? Or does it just happen because there isn’t a better way? Will piracy be the only relief that I am offered?

In writing to the Australian Government, Google says, “We believe there is significant, credible evidence emerging that online piracy is primarily an availability and pricing problem.” You better believe it. I can’t even throw money at them!

In this article, we reviewed VirtualReality.io, the Rift Navigator concept, and the demonstration release of Anarchy Arcade. We showed how the thread of media management runs through them all and illustrates an upcoming problem in virtual worlds.

If the issue of media continues to go unsolved, either virtual reality will be a diminished social experience, or it’ll be the most clear and unfortunate demonstration yet of why media, content, and consumption needs to be brought under a rational framework.

One response to “Today’s Glimpse into the Virtual Home”